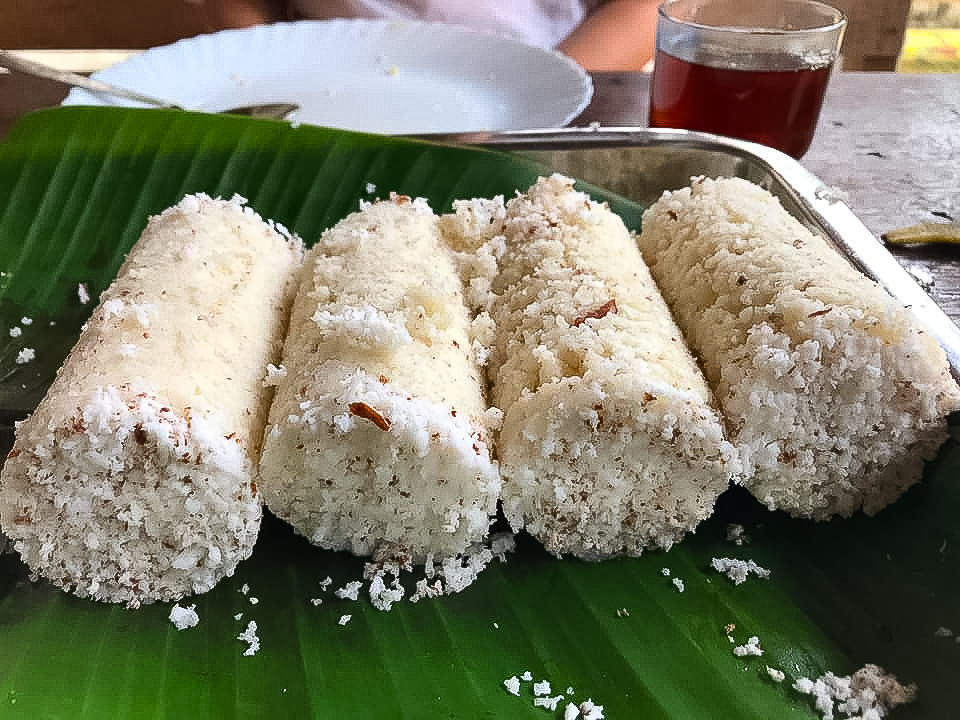 Kerala cuisine, a medley of sugar and spice and everything nice

Kerala cuisine is history on a plate. Due to its location along the Malabar Coast, throughout history, this south Indian had regular interactions with the rest of the world. Spice traders from far away countries have been visiting Kerala since time immemorial and they have all left their cultural imprints on the Kerala cuisine. Thus, the food is a delightful amalgamation of Arab, Portuguese, and British influences. Keralites are, as declared by their state tourism ministry, ‘Humans by Nature’ and this deep connection with the natural environment can be seen in the abundance of fresh ingredients in their food. Spice rules here along with the queen coconut. The sea provides bountiful fresh seafood and the lush lands offer a variety of fruits, vegetables, spices, tea, and coffee. Animal husbandry thrives here and the state enjoys chicken, lamb, and beef dishes with gusto. This incredible mix of ingredients and historical influences has given rise to an exciting array of sweet and savoury dishes that will leave you wanting for more.

Kerala cuisine looks as good as it tastes

Being an immense foodie, over the years I have thoroughly enjoyed the delicious Kerala cuisine during my constant travels to the state. I love its vibrant-looking dishes, in which every ingredient can be seen and felt individually; the bright pops of green of the curry leaves, and the silky sweet coconut shavings that are used as a garnish. Their stews, both mellow and fiery, are some of my favourites and I can eat puttu every single day of my life. The variety of Kerala cuisine is quite striking too and from the rich, redolent culinary gems of the Malabari Muslims, rustic tribal cuisine to the famous Onam vegetarian platter, it is a food lover’s delight. The lush soil of the state produces an abundance of vegetables and the most popular ones used in Kerala cuisine are tapioca (kappa), taro (chembu), elephant yam (chena0, drumsticks, bitter gourd, and plantains. Rice dominates as the state staple and most of Kerala’s dishes are rice-based.

Kerala’s Hindu community is traditionally vegetarian although nowadays many of them consume chicken, meat, and seafood. This community contributes the best vegetarian dishes and the cuisine’s crowning jewel of Sadya feast is also served by them. Some of the known delicacies among the Hindu community include Idiappam (a rice-noodle dish), Puttu (a steamed dish made of powdered rice and grated coconut), and Kadala (a Bengal gram curry), Appam, Idli and Dosa. The main vegetarian meal consists of rice accompanied by Sambar (a thick lentil stew), Pulisherry (a curd-based dish) with one or more side dishes such as Avial, Thoran, Erisherry, Olan, Kalan, Pachadi, Kichadi, etc. The famous vegetarian feast of Sadya is a combination of all these dishes. It is served during the harvest festival of Onam or during auspicious occasions.

In my eyes, Sadya is one of the grandest of Indian thalis (meal platters). A sadya platter can consist of up to 28 dishes at a time. Traditionally, it is served on a plantain leaf, with the tapering side of the leaf pointing to the left of the guest. Parboiled red rice is served as a traditional staple along with a variety of side dishes, stews, curries, stir-fries, pickles, chutneys, and desserts. Since it is a ceremonial feast, sadya comes with certain serving protocols. Dishes follow one another in a particular manner and it is believed that this pattern is based on the ancient wisdom of Ayurveda. Parippu (a runny curry made of small lentils and ghee) is served right after rice and it is followed by the thick vegetable stew called Sambar. Side dishes are served alongside and some of the most famous Sadya side dishes are Avial, Thoran, and Olan. Savouries accompany the meal at this stage and these may include fried banana chips (Upperi), Poppadams, and a variety of pickles. The milk pudding or payasams are served next and Kerala cuisine has a staggering variety of these sweet dishes. Most of them are made of jaggery, milk, coconut milk, cashew nuts, raisins, and fruits. A ripe yellow banana is served along with payasam. The end of the sadya feast is marked with a small helping of rice served with a thin, runny Rasam (a fiery mixture of tamarind juice, buttermilk, chilies, and other spices). It is supposed to aid with digestion. Good etiquette demand that a sadya meal is wound up by folding up the plantain leaf in half.

The Mappila dishes of Kerala cuisine

Some of the most beloved dishes of Kerala cuisine come from the Malabar Coast. In the pre-Independence days, Kerala was divided among the princely states of Travancore, Cochin, and Malabar. The famous Mappila cuisine comes from the Malabar Coast and it has distinct Persian and Arab influences. Since the Malabar coastline held a prominent place in the spice trade, in the olden days, it saw traders from all over the world. The Arabs were one of the first to arrive and over the years, many of them settled along the coast. This resulted in the rise of the Islamic community and the emergence of the rich Mappila Cuisine. The Muslims of this region are called Mappilas and their cuisine is famous for its extensive use of meat and seafood. The most famous dish of this region is the Malabar Biriyani which showcases a liberal use of spices such as black pepper, cardamom, cinnamon, red chilies, coriander, and ginger. This biryani is prepared using a particular kind of small-grained rice called the Kaima Rice. The Malabar Biriyani hails from the coastal city of Kozhikode and gives the iconic Thalassery Biriyani a run for its money. A Mappila meal is usually concluded with a glass of Suleimani, a tea brewed with a combination of spices like cardamom, cinnamon, and a hint of lemon. Other noteworthy Mappila dishes include Mandi or Kuzhimandi, (a one-pot meal of chicken and rice that originates from Yemen), Pathiri(a flatbread made of rice flour and stuffed with a meat filling), and the flaky fried Malabar parotta. Interestingly, Pathiri is said to be of Egyptian origin and is a variant of Feteer, a flaky Egyptian layered pastry.

Hints of Portugal in the Christian community dishes

One of the strongest communities of Kerala is the Christian community. Christianity spread in Kerala along with Islam and both had roots in the spice trade. Kerala had regular trading relations with many Western countries with the most important being Portugal. It is believed that sometime around the 1st century CE, St. Thomas (Apostle of Jesus Christ) landed in Kerala and started preaching Christianity. Then came the Portuguese who arrived in the 15th century AD and brought along potatoes, tomatoes, pepper, and pineapples along with Christianity. They married into local families, spread Christianity far and wide, and left a significant impact on Kerala cuisine. Many delicious dishes of Kerala go back to this heritage and the most famous one is Vindaloo (a variant of the Portuguese dish, Carne de Vinha d’alhos). It is a dish that relies heavily on vinegar, an ingredient that was unknown in India prior to the arrival of the Portuguese. The most famous Christian community dishes come from areas such as Cochin, Thrissur, and Kottayam. This community cuisine is meat-heavy and uses chicken, mutton, pork, seafood, coconut milk, and spices liberally. Major religious celebrations like Easter and Christmas call for elaborate feasts and the most popular dishes of this community are Appam (rice pancakes) and Ishtu (a mild coconut milk flavoured stew). Other delicacies include Kappa and Meen curry (tapioca with spicy fish curry), Meen Pollichathu (fried fish wrapped in banana leaf), Meen Porichathhu (fried fish), Meen Moilee (mild flavoured, coconut milk-based fish curry).

The top 10 dishes you must try in Kerala

When one visits Kerala, God’s Own Country, one does not really look for community-focused dishes. One, instead, enjoys the plethora of good food that this state offers. From velvety vegetarian stews, rice-based pancakes, beef stir fry, fish curries, to fried chicken, Kerala cuisine is incredibly varied. One thing however remains constant and that is the use of coconut in every dish. From shredded coconut to coconut milk, this ubiquitous ingredient is used in different forms and levels in every single dish in Kerala cuisine. It is believed that Kerala derives its name from the two words, Kera (Coconut) and Alam (Land) meaning the ‘Land of coconuts’ and one only has to look at their food to understand why. Presenting the top 10 dishes you must try in Kerala.