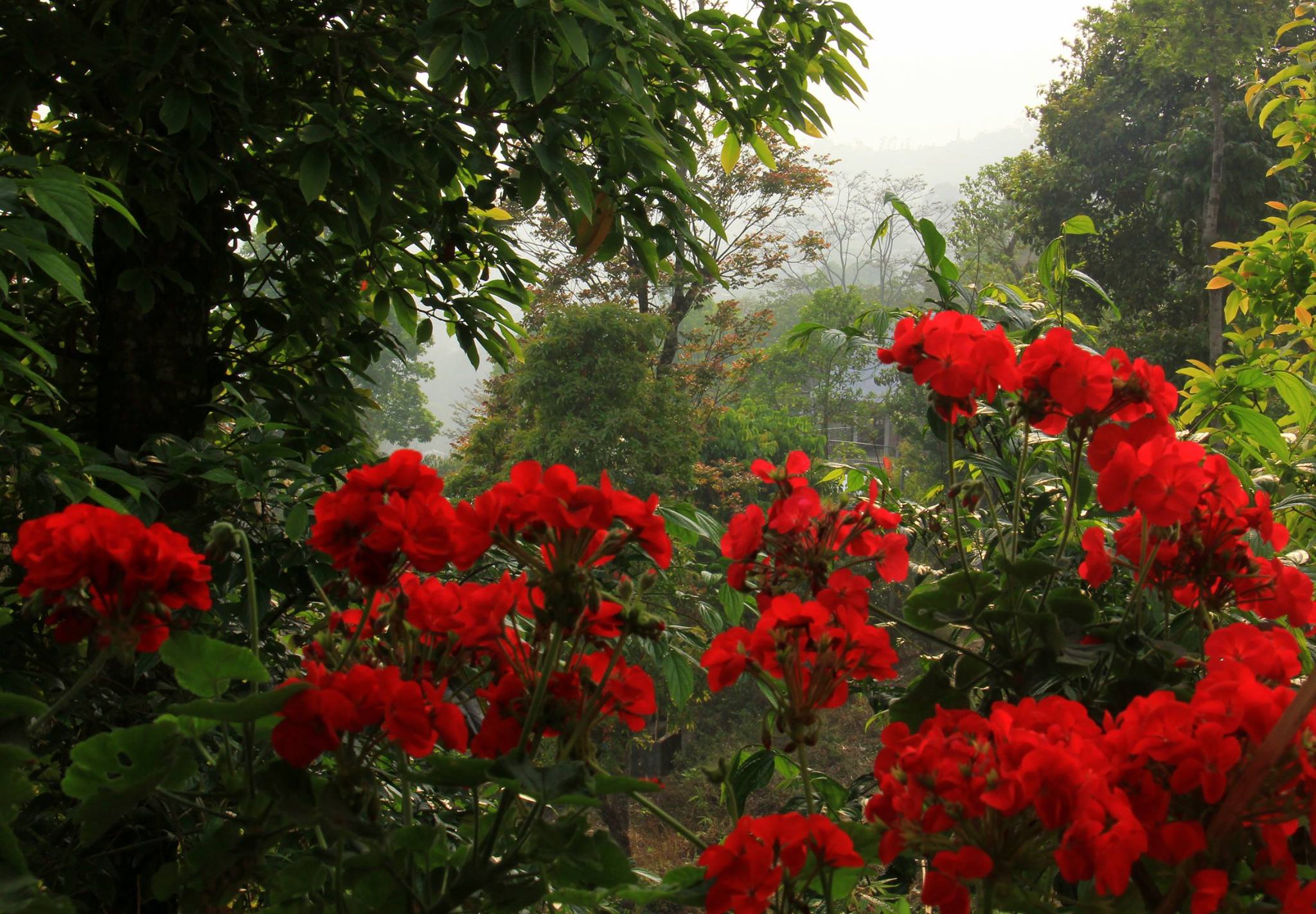 Kalimpong and the art of doing nothing

What can I say about our Kalimpong break? That it had been lovely, intrepid, lazy and much needed, after our crazy, impromptu cross country motorbiking trip. The month had been March when mahua had carpeted rural roads with fragrant blossoms and cuckoos had called out from mango groves. Holi had come and gone and the young Indian summer had already parched the lovely hinterlands of Rajasthan, Uttar Pradesh and Madhya Pradesh. Our trip had shown us gorgeous glimpses of Agra, Jaipur, Khajuraho and Panna National Park and Tarek and I had braved the summer sun (as well as the stunning, but dreaded Chambal region) on a trusty Royal Enfield motorbike. That had been a long ride to remember and the only glitch had been our impending baby. I was 4 months pregnant, when we had embarked on the crazy trip and though a lot of fun, heat and exhaustion of our motorbiking chronicle had left me weak and a tad sick.

On that trip, we had pushed our limits to the maximum, braved harsh weather conditions and on our 2nd last day at Khajuraho (after a bout of severe heat exhaustion and dizziness) had decided to head for a cooler, quieter place in the hills. Thus, we had headed eastward towards Kolkata, my hometown and although, Darjeeling had been our first choice, we had happily settled for the little hill station of Kalimpong. The reasons behind choosing Kalimpong had been plentiful and less crowd had been its biggest draw. Being on a lower altitude of 4,101 feet, Kalimpong had also guarenteed a shorter uphill drive than Darjeeling and by the time, we had landed at Bagdogra airport, our road weary bodies had been ready to crash out. The drive to Kalimpong from Bagdogra Airport had taken around 4 hours and we had breathed in relief as the grubby town of Siliguri had melted behind us. Immediately thereafter the beautiful Dooars region had welcomed us to the foothills of the Himalayas and lush, greenery, winding rivers and rows of silver langurs had accompanied us up the road. Kalimpong had arrived without much fanfare and though the little town had appeared gritty at first sight, we had fallen in love with its flower filled houses.

The riotous hilly blooms had been  in fact, our most poignant memory of Kalimpong and to us, it had been the charming “City of Flowers”. Our home stay, “Roots, Shoots and Beds” had been beautifully located a bit outside the congested little town and it had been our best accommodation experience in the entire India trip. Complete with thickly flowering garden, the homestay had included a clean room which had overlooked the valley and on clear days, we had been able to see snowy peaks in the distance. Tea, breakfast and meals had been served on the lily filled verandah and a huge Himalayan cherry blossom tree had bloomed outside our window. In the evenings, a million fireflies had crowded inside our room and strawberry patches, bamboo thickets and orchid pots had surrounded us like a Garden of Eden. It had been the perfect place to rejuvenate after our grueling motorbiking trip and we had fallen into Kalimpong’s relaxing pace with complete ease. Our days had been filled with short hikes, little trips on a rental motorbike and wandering around the bustling, colourful little market. Those had been very nice days, spent doing nothing much and Kalimpong had offered us the rare luxury of having no itinerary or fixed plan. This had been possible, perhaps because of the small compact local community, where everybody had known everybody and the fact, that Kalimpong had not offered as many spectacular or famous spots as the next door “Queen of Hill Stations”, Darjeeling.

The town of flowers

Best suited for those looking for an intrepid getaway, Kalimpong had been situated 50 kilometers east of Darjeeling on the lower ranges of the Himalayas. The town, which had been an erstwhile Bhutanese territory, had sprawled along the saddle shaped mountain ridge and had offered beautiful panoramic views of the Teesta Rangit Valley in Sikkim. The mighty Kanchendzonga had loomed over it and the hill station had been the original home of the Lepcha people. Its close proximity to the ancient Silk Road points of Nathu La and Jelep La had blessed the town with commercial importance and Kalimpong had gone down into history as an important trading outpost for fur, wool and other commodities on the vital route to Tibet. The apparent prosperity had drawn a large number of migrants from neighbouring states and countries like Nepal and Kalimpong had soon morphed into a full fledged British colonial town. Their influence had been heavy on the town’s civicscape and till today, Kalimpong is pockmarked with quaint old churches, Scottish missionaries and old British constructions. Buddhism too had left its mark in forms of some old beautifully painted monasteries and these had been some of the places which we had visited during our trip.

This series on Kalimpong is dedicated to leisure travel; the kind of travel where you really unwind, relax and sleep for hours in a hammock; when time is at your beck and call and wanderlust seems to be a foreign, unknown concept. With the sudden boom of travel blogs and aspiring travel writers, exploring, wandering and seeking the unknown seem to be so much in vogue, that I often wonder, if people have really forgotten to have fun on their vacations. While this attitude of mine may seem to be the best case of the pot calling the kettle black, it had been thanks to Kalimpong that we had re discovered the nearly forgotten joy of simply doing nothing. So, come with us on this lazy journey to Kalimpong, where just breathing in fragrant pine scent and staring at flowers are the best things to do.

An erstwhile territory of Bhutan

Kalimpong is the original

Home of the Lepcha people

Located in the eastern part of India

Kalimpong had been important

For its proximity to the Silk Road

It is a city of flowers

Seem to grow out of nothing

And the best way

Is to give in to its pace

Stroll around the market

The forgotten art of doing nothing