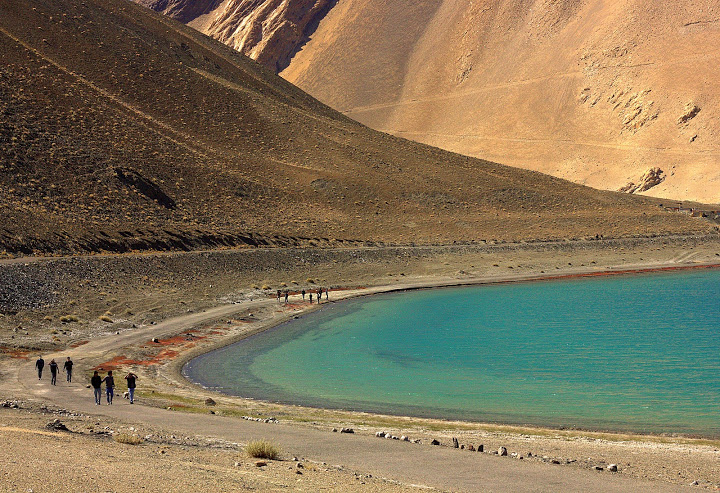 Pangong Tso is closely related to the Tibetan word Lake Banggong which means ‘long, narrow, enchanted lake’ and it is indeed spectacular. One of the largest salt water lakes in Asia, Pangong is situated 154 kilometers southeast from Leh, the capital city of the Himalayan region of Ladakh in India. Jointly shared by India and China, the co owning countries had often fought fiercely along its shores and until mid 90’s Pangong used to be a restricted area. Today, everybody can visit Pangong Tso and inner line permits are mandatory for all nationals (except Indian passport holders). Located at an altitude of 4267 meters above sea level, it is one of the coldest places in Ladakh and the long, narrow 134 kilometers lake is one of the most beautiful natural sights in the world. What makes Pangong so special is its blue-green water, which on fine days is said to reflect more than seven shades of colours and the surrounding panorama is equally enchanting.

Surreal blues and lack of habitation at Pangong Tso

The tranquil turquoise lake lies in a bowl like cavity between the snow-clad Pangong Range to its south and the coppery Changchenmo Range casts dramatic reflections on its deep azure waters in the north. Tibet lies at an enticingly close range from there and the seductive lake mirrors surreal palette of vivid blues. Free open skies add magic to the already mesmerizing sight and the contrast of the rich blue gold against the stark stony snow-brushed mountains is unforgettable. A near complete lack of human habitation makes the landscape more surreal and the journey to Pangong Tso is as lovely as the destination itself.

It takes nearly 5 hours to reach Pangong Tso from Leh and the drive through the magnificent mountain landscape is probably one of the most scenic in the world. Constantly changing scenes of rugged peaks, sparkling streams, patches of pastoral meadows, sand drifts, quaint bridges, little villages, and reflective ponds dot the journey and the sheer altitude takes a toll on the body. While summer definitely brings out Pangong’s beauty to the fullest, it also draws hordes of tourists and the sliver of sandy spit sticking into the lake like a thin tongue gets overcrowded for enthusiastic photo moments. Autumn is also ethereal there and though much colder, the rich burnished hue of the decaying wildflowers en route makes the drive more photogenic.

The lake too is less crowded and it is possible to find solitary spots along the bank only for yourself. I had visited Pangong Tso during one fine autumn morning and it had been a once in a lifetime experience. The altitude sickness had not affected me much and though there had been a few occasional roadblocks due to landslides on the way, the drive had made me very happy. Ladakh, despite being enveloped by the Himalayas in a most claustrophobic way, has a very liberating aura and I had felt childlike young and free in midst of the ancient landforms. Just occasional sticking my head out of the jeep window to catch some wind in my hair had been freeing enough and the open skies had given out a feeling that there was nothing wrong in the world. The day had felt good enough to eat and the greedy cute marmots and shaggy dzoukus had animated the scene. I had got glimpses of Pangong’s ethereal blue even before our jeep had stopped by its shores and the azure lake had tantalized from between the high mountains.

Reaching the magnificent Pangong Tso had felt like a confrontation and the azure blue waters had taken my breath away. The sheer magnetic aura of the place had been surreal and I had felt timeless just standing by its shore. Though it had been a day trip, I had spent some hours there; simply walking along the banks and catching the play of shadows on its surface as clouds had dramatically raced overhead. A few late herds of Brahmani ducks and bar-headed geese had filled the landscape with cheerful noises and rustling wind had mercifully muted out the human sounds. It had been one of the most powerful natural landscapes in I have ever come across and till today, the memory of Pangong Tso’s unbelievable beauty leaves me numb. It is not easy to describe some moments and feelings in words, especially when they go deep into your soul and Pangong Tso had been spiritually soothing too. Words do not do justice to its loveliness and so this photo essay post is a tribute to the magnificent Pangong Tso, the “long, narrow enchanted lake” of the Himalayas.

Pangong Tso is one of the most charismatic lakes situated on the Changtang plateau in eastern Ladakh region of Jammu & Kashmir and it is an approximately five hours drive from the capital city of Leh. The route passes through beautiful Ladakh countryside and over Chang La, the third highest motorable mountain pass in the world. June to September is the best time to travel to Pangong Tso and no inner line permit is required for Indian nationalities/ tourists. Foreign visitors, however, must have group permits (for a minimum of 3 people) which must be accompanied by an accredited guide and the permit is issued by a tourist office in Leh.

To make things easy, opt for a small group tour

Alternatively, opt for small group tours which are easily available at any tour operators at Leh. For those who are looking forward to staying close to the lake, tents are the only option. There is a limited (and expensive) choice of accommodation around Pangong Tso area. The nearby Lukung offers camping facilities in Eco huts and basic accommodation is available in Spangmik, which makes it the only hotel offering luxury tents as well as rooms. The local households also offer accommodation but most of them have shared toilets or toilets located outside the house. Eating options are also pretty limited at Pangong Tso. It makes sense to carry your own food and snacks since the eateries around the lake offer very basic fare. The other option is to eat at the locals’ homes and they provide good home cooked food at an affordable price.

Through a magical landscape

Brings one to the

Shores of the enchanting Pangong Tso

It is a journey through the land

As beautiful as they are

To the shocking beauty of

No matter how you arrive there

Pangong Tso will be

An experience of a lifetime